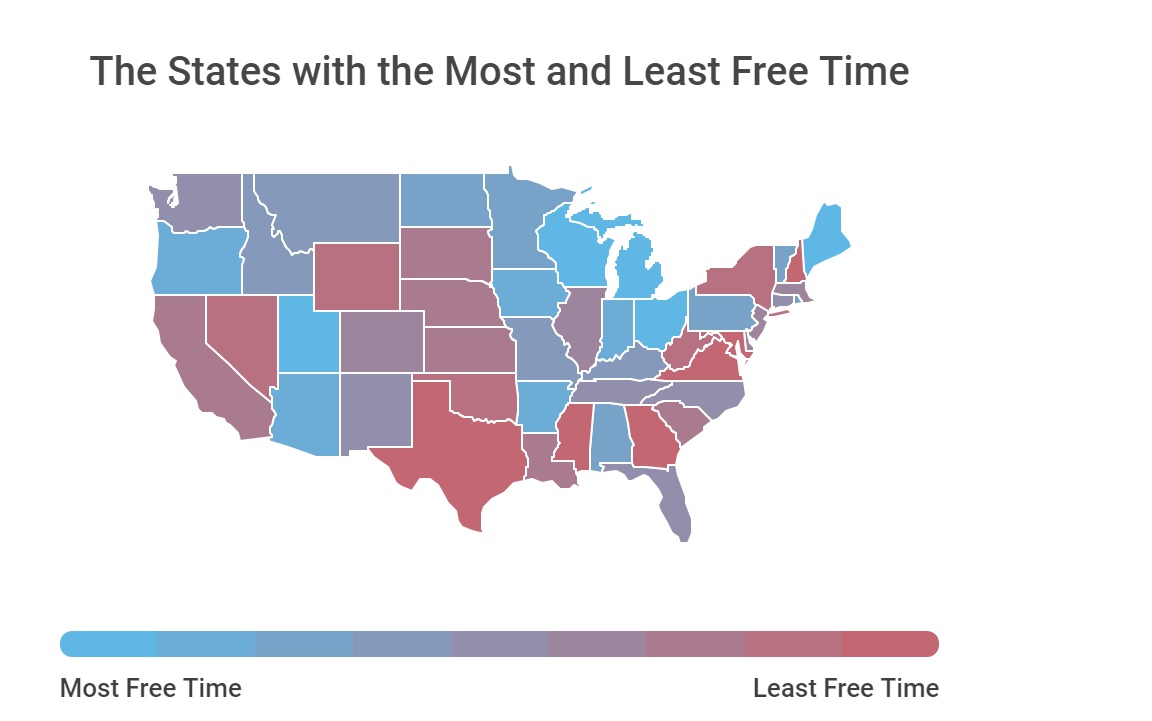 The Bureau of Labor Statistics (BLS) says that the average full-time worker has about 3.25 hours of leisure time available on weekdays – and since relaxation is part of our business model, this got us wondering: how is free time related to other important areas of life?

Using government data, we had a researcher crunch numbers for all fifty states and found the states with the most free time, or at least the least time working – and also learned that people in workaholic states tend to love their jobs and have better communities, but feel like they have less purpose and aren’t doing well financially.

We’ve got the full rankings at the bottom of the page and a complete breakdown of the methodology, but first, here are the top ten when it comes to having free time:

First, we needed to determine how much free time people in each state had. While the BLS periodically publishes a report on “leisure time” like the one we mentioned before, it comes in the form of a single set of questions and is all voluntary – we thought a better measurement would be to create a score for each state.

We used BLS and American Community Survey data to gauge how much time each week jobs were taking up, based off of time spent commuting and average hours in a work week.

Our third factor was how much vacation time workers used, represented as a percentage of the total allowed vacation hours from the latest Bureau of Economic Analysis data.

We ranked each state by these three elements and totaled the rankings; this gave us our “free time” scores and rankings, which you can see below.

States with the least amount of free time

It’s obvious that states with higher cost of living have more expensive housing, but it will probably surprise you to learn that states with the lowest housing costs work more hours than others. 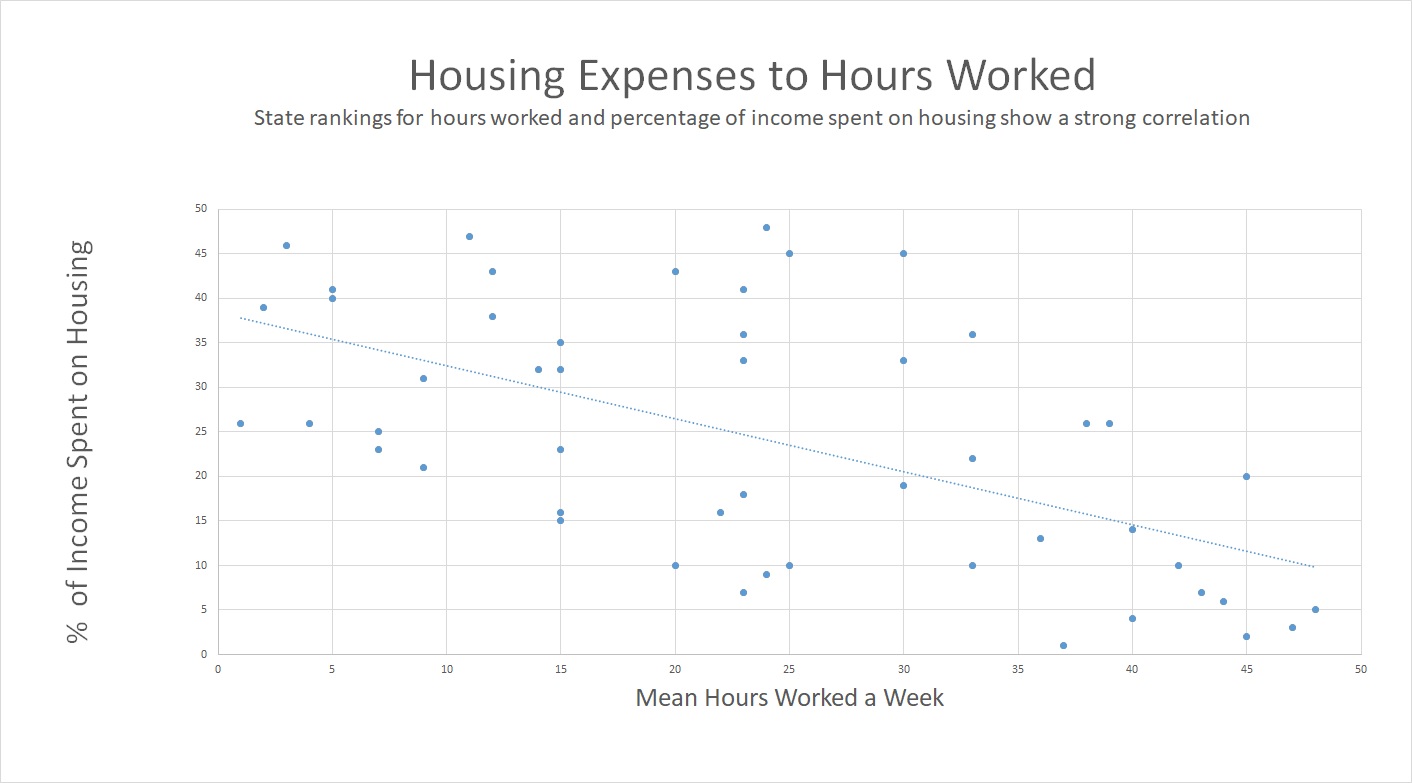 And while the correlation wasn’t quite as strong, working more hours is also tied to higher unemployment and a worse feelings of financial well-being, as found in Gallup’s Well-Being Index.

The higher percentage of income spent on housing could be skewed by employees who work in cities with higher costs of living and more demanding professional careers, like a software engineer working through crunch time in Silicon Valley.

But this theory is complicated by the worse state of financial well-being being reported. More likely, it’s simply that states with worse economies also have higher rates of people working multiple part-time jobs or simply more hours in lower-paying jobs.

So, when you look at states that work the most you’ll also see the places where people are worried more about their jobs and paying the bills.

Project: Time Off claims that people who take vacations report higher levels of happiness than those using little to none of their time for travel. That may be, but it’s probably temporary.

There are negative correlations of varying degrees between taking more vacations and literallyevery factor we considered:

And of course, correlation isn’t causation and all of that, but the correlations between unemployment and financial well-being in high-vacationing states are strong enough to suggest that the Project: Time Off respondents’ reasons for not vacationing may have been valid:

Employees who were concerned that taking vacation would make them appear less dedicated or replaceable were dramatically less likely to use all their vacation time (61% leave time unused, compared to 52% overall). This held true for those who felt their workload was too heavy (57% to 52%) and no one else could do their job (56% to 52%).

For shorter commute times, a positive correlation for most factors

States with shorter commutes see more job love, spend significantly lower portions of income on housing, have less unemployment, and have higher rates of community well-being. In states where people commute the least, there are very strong correlations between reports of loving one’s job and lower housing costs.

Chalk it up to the urban/suburban/rural cultural divide if you’d like, but states that have the lowest average commutes have an edge in most factors.

That said, long commuters tend to see report stronger feelings of purpose and financial well-being, potentially because they’re spending a significant amount of time getting to a job title and paycheck worth waiting for.

These are the most relaxed states in America

And in case you were wondering, job love was also correlated to every stress-reducing factor except longer commutes.